Today, we warmly welcome you into the world of Erdrea, with a free downloadable demo now available on the Xbox Store. Following a stellar opening movie sequence, you’ll find yourself as the Luminary on a quest to uncover the mystery of your fate. You’ll meet a charismatic cast of supporting characters, and continually be surprised as the story brings in playful twists to keep things interesting. The demo packs in almost 10 hours of content to hold you over until the full game releases on December 4 for Xbox One and Windows 10 PC as an Xbox Play Anywhere title as well as Xbox Series X|S through backward compatibility and with Xbox Game Pass.

Dragon Quest XI S: Echoes of An Elusive Age – Definitive Edition marks the debut of the beloved role-playing game series to the Xbox platform. The series brings players into larger-than-life stories; adventuring as a hero with a band of trustworthy friends, exploring an immersive world, and using unique tactical strategies to win battles.

This will be the first Dragon Quest game for many Xbox gamers. Whether you’ve never played a Dragon Quest game before, or if you’ve played the classics and are looking to jump back in, this is the perfect way to experience the Dragon Quest series. The Definitive Edition adds in the options switch between Japanese and the widely praised English voice over or even switch between a fully orchestrated or synthesized retro style soundtrack. When you get the full version of the game, you’ll even have the option to play in a retro 2D mode to make it feel like an old-school DQ game! There is also a photo mode to capture your favorite moments, along with a whole host of other features.

I encourage you to take the time to stray off the main path and explore all of the side quests, which don’t just grant treasure, but also gives you a deeper look into the very world you are trying to save. Your save data progress carries over when the game launches for Xbox One and Xbox Series X|S as an Xbox Play Anywhere title on December 4! For an added bonus, you’ll also receive three Seeds of Skill once you transfer your demo data to the full game. Continue your journey and fully access even more additional new features, such as new character stories to learn more about your friends and the ability to visit the 16-bit world of Tickington.

I hope you take the leap and enjoy your time with Dragon Quest XI S: Echoes of An Elusive Age – Definitive Edition, as it brings you the best of what the DQ series has to offer. If you enjoy RPGs and grand adventure, check out the free demo today! Learn more at: www.dq11.com. 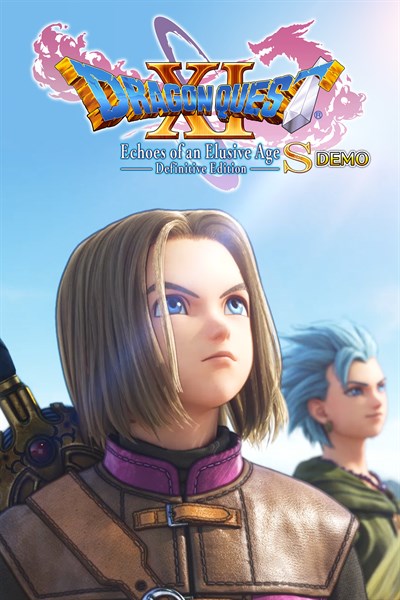 Experience the beginning of an all-new adventure!

Join a young hero as he takes his first steps towards becoming the Luminary, a legendary hero destined to save Erdrea—and then carry over your progress into the full game!

This demo will give you a generous glimpse of the epic tale that awaits you in DRAGON QUEST XI S: Echoes of an Elusive Age – Definitive Edition.